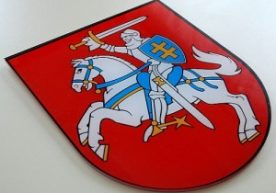 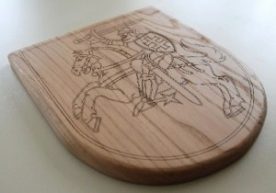 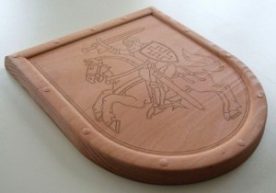 The coats of arms were popular mostly during the Middle Ages. Knights used coats of arms as distinguishing marks, since it was hard to recognize knights dressed in full body armor one from each other. Coats of arms were demonstrated in most prominent places- on a shield, a flag, a knight’s helmet or a coat. Symbols depicted in the coats of arms reflected the most important aspects of life- aspirations, ideals, desires, ideas. Coats of arms became so popular that now we can find them not only in flags, but also in some of the remaining buildings from medieval times, for objects or clothes of various uses.

Today the popularity of coats of arms is not gone. Cities, districts, counties, various sports, cultural or civic organizations have their own coats of arms. Coats of arms are often presented in the flag center, they are highlighted as the main element of the flag. If a small town doesn’t have its own coat of arms or there is no data on the previously existing coat of arms, it is simply designed again. Some people can be proud of having coat of arms of their family. So, the coat of arms in the heraldry occupies the most important place.

Coats of arms production methods can also be varied. Often, coats of arms are artistic crafts of art masters, each of which is unique. Wood, metal, clay, glass or even stone can be used for their production. Of course, such coats are extremely valuable and not everyone can manage to buy them.

Coats of arms can also be made using modern technology (milling, laser, press). Modern materials can also be used, such as, organic glass, which can look like ordinary glass.

Our coats of arms are made by putting together milling and laser cutting, and UV printing technologies. We can also produce coats of arms of cities, districts, and families. Such product will undoubtedly decorate any government office, business office or private premises.